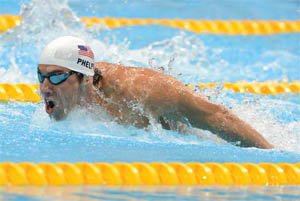 To be honest, most of the time I didn't really know what day it was because most of the days were 16-18 hours and very exhausting. In one spell I didn't actually eat any food for a 24-hour period, I just didn't have the time. You would get to one venue, shoot and then race back to the transport hub to get back to the MPC or the next venue I would be covering.

The worst day for me was Thursday which was mainly in one venue, the ExCeL. You would think this would have made life a little easier, but the ExCeL is huge and I don't know how long the day lasted, but it seemed to go on forever!

On this day, as I was one of the few Welsh photographers, I wanted to get images of Jade Jones in the 57kg Taekwondo (Jade is Welsh, see cover!). I needed to get her in the preliminary rounds as it wasn't guaranteed that she would make it through to the finals. I did the shoot up to the point when the other British lad had fought and won his fight. I then walked up to the wrestling arena where a British girl was fighting. This was only short as she lost her first fight and went out of the competition. I stayed for about a half hour to get stock images of some of the other competitors.

By this point I had a call from Steve White telling me to get to the boxing as Nicola Adams was in the first ever female boxing final. So off I went, got into position, which was right at the back of the stand, and waited for her fight to begin. Once the fight was over I needed to get back to the Taekwondo as I wasn't sure that I had enough images of Jade Jones and she was fighting in her quarter final. I went back and sat in a different position as I had the referee block my sight line on the previous occasion. This time I got some decent shots of her. At this point I basically had to catch the bus and get back over to the Olympic Park to get the best spot I could for the men's 200m final. Luckily I managed to get a position about level with the track. I had wanted a trench position, but they had been taken by pool photographers and those with tickets. 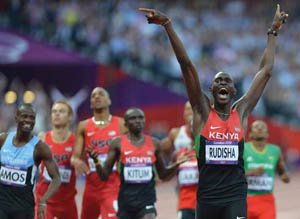 David Rudisha of Kenya celebrates winning the gold medal in the Men's 800m final and also breaks the world record with a time of 1:40.91

I stayed there for about two hours and got some great shots of David Rudisha of Kenya winning the men's 800m final and smashing the world record. Then it was a case of getting ready for a quick race in which a guy by the name of Bolt would be running - the men's 200m final. As the race got under way I picked up Bolt as he came onto the straight, I got some nice shots, with all the athletes in the frame, as he crossed the line; I focused particularly on him as I knew he had won the race by a good margin, and with his being known for some great celebrations.

At this point I ran my own race. The men's final was I around 8:50pm and Jade Jones had made it through to the final in the women's Taekwondo, which was back at the ExCeL, about an hour away. So I didn't waste any time - I was out of there, and got back to the ExCeL as fast as I could; I arrived at my position at 10:10pm.

How did you go about processing and first-editing your images at the end of each session, or did you have to defer this until the end of the day?

We had a rule on editing; only send out five images and one of these to include medals and celebrations, if I had them. There was no point in spending time editing as I needed to get to the different venues. And as I was the only photographer working for Camerasport we did not have the luxury of having one photographer covering one thing and another covering another event. I was on my own and needed to be as mobile as I could. Often I would use the time I had on the bus back to the Olympic Park where I would download, caption and edit, then FTP them back to base.

How many photographers did your share each pitch with, was it the permanent scrum it looked, or did it vary?

It varied from venue to venue, for example the 100m finals was rammed with photographers and we were pretty tightly packed. But at some venues only say 10 photographers where there. The scrums were when there was a medal ceremony, there would be a lot of pushing and shoving, but all in all it was ok.

How many images did you shoot in total?


Please Note:
There is more than one page for this Article.
You are currently on page 3 Contact Ian Cook


There are 358 days to get ready for The Societies of Photographers Convention and Trade Show at The Novotel London West, Hammersmith ...
which starts on Wednesday 20th January 2021