Back in 2005 when London bid to host the 2012 Summer Olympics it was promised that there would be a lasting legacy to sports participation in the UK. The Olympics are never just about winning; they're also about encouraging people to improve their lives by being inspired to take up sport.

Triathlon is one of the true Olympic Legacy success stories - in 2013 there was a participation increase at competitive events of almost 20%. You might be wondering how this affects us as photographers, but a 20% increase in participation for a sport means 20% more potential clients for the savvy sports photographer! It's also worth noting that the largest age category for triathletes is 35-44, an age group which should theoretically have money to spend on luxuries such as photography (and let's face it, triathlon isn't exactly a cheap sport to take part in either!). 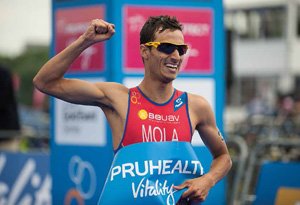 It took Ian just seven years of being in business as a sports photographer before he photographed the 2012 Summer Olympics - an achievement that not many can claim! Being a Welshman means that he really has to concede to rugby being his favourite sport to photograph, but the last few years have seen Ian's images really gain ground in the world of triathlon. I wanted to know how he made the jump from the mainstream to endurance sports. "One of my clients is Welsh Cycling and so I had already shot quite a bit of cycling. The 2012 Olympics gave me the chance to turn my hand to a little triathlon photography, although logistics made it a struggle to get to locations like Hyde Park." It was a chance meeting with Ross Grieve of Dirty Green Trainers in London that really kicked it all off.