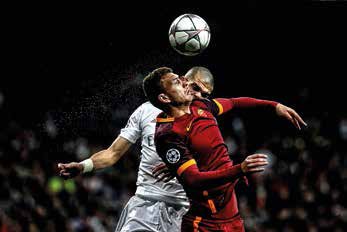 Inamongst all the political strife we are having to endure at the moment we can at least report on three items of good news to add to Gove's disappearance!

Domenic Aquilina has won the prestigious Moscow International Foto Awards in the Editorial Sport category. His winning shot had already been placed on the page (32) of this issue, in a feature on Dom's longstanding association with UEFA and the Champions League Final, so the win came in as a bonus. The website www.moscowfotoawards.com is well worth a visit; it contains Dom's shot along with a host of other excellent and thought-provoking work.

Sport photographer and contributor, Ian Cook, is featured alongside Domenic in this issue but Ian has recently become a prouder dad with his son, Aston, winning the category World Champion title at the recent World TAGB Tae kwon do championships. That should stop us having to endure Cookie's pictures of curries in his carp fishing tent! The way young Aston is progressing we have the potential for his dad to be photographing him at an Olympics some time in the future - now there's a front cover opportunity!