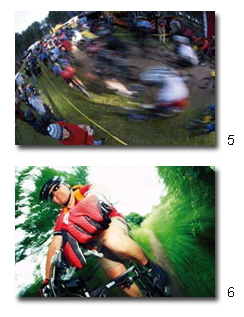 Image [3]. When Maxim called up and wanted a group test of racing machines I knew I had to get some eye-catching images. I decided on POV. This time looking back at the bike as in a real race situation. I scoped a quiet piece of road where we could work with little hindrance because shooting this kind of image means constantly looping around in the middle of the road! This image was shot on film on a Nikon F5.

I clamped it to the handlebar of the forward bike with a Manfrotto Superclamp so the rig hung upside down.

Look closely and you can see the shadow of the body and lens. (The magazine retouched the finished item.) This was also before I owned a radio release so I ran a short cable release to sit under the camera operator's (yep, they are my chubby thighs!) fingers. But not so obtrusive as to hinder braking! Image [4] is an alternative take.

Back to the monopod for image [5]. But this time I held it way up over the racers as they burst over the start line. I used the radio release and a 10.5mm fisheye to ensure I got a lot of the scene in the frame. I purposely did not use flash which would have, to some extent, frozen the scene and I wanted to show the excitement that a bunch sprint yields. I used a shutter speed of 1/8s on a D200.

It pays to fire a lot of frames off in this situation and edit down to the one that fits the bill. I always change the POV as I shoot , simply by rotating the monopod.

Image [6] I shot both as an experiment and a stock image. Here I used a Manfrotto Magic Arm, an ingenious and very useful piece of photographic equipment. At one end I have a Super Clamp, at the other, a camera bracket, but this set-up can be altered to suit needs. The arm was clamped onto the handlebar next to the stem and rotated outward and downwards to achieve the desired angle of view.

A D200 body minus the battery pack was used to reduce weight, with an SB-800 flashgun attached. I used a fisheye lens and attached the white dome diffuser to the gun to spread the light since the camera was so close to the subject and I didn't want any unsightly hotspots. A cable release was taped to the bar to allow for a release by the rider's thumb but not so it would show in the shot. The location was relatively crucial to this image.

I tried to find a section of track that has overhead foliage which I wanted to 'streak' under the slow shutter speed. The shutter was released at 1/15 of a second as I rode gently (ish) down the trail. First time around the camera kept slipping on the bar; a body and flashgun hanging on a magic arm are heavy and I didn't want to screw down the clamp so tightly that it damaged the aluminium handlebar. The answer was a bungy cord which I hooked on the bar and around the camera bracket. It moved still, but not enough to spoil the result.


Please Note:
There is more than one page for this Article.
You are currently on page 2 Contact Geoff Waugh


There are 112 days to get ready for The Societies of Photographers Convention and Trade Show at The Novotel London West, Hammersmith ...
which starts on Wednesday 17th March 2021